Somerville is a small town in Morgan County, Alabama. It is included in the Decatur Metropolitan Area, as well as the Huntsville-Decatur Combined Statistical Area. As of the 2010 census, the population of the town is 724. Somerville was the county seat of Morgan County from 1818 to 1891, when the seat was moved to Decatur. The town was named for Lt. Robert M. Summerville (the spelling was later changed), an officer killed in 1814 during the Battle of Horseshoe Bend.

The Somerville Courthouse, one of Alabama's outstanding landmarks, is the oldest standing courthouse in Alabama and is of a type of architecture which is rare in the state. Its style follows that of the buildings built in Virginia in the late 1700's and early 1800's.

In 1819 Somerville was incorporated as the county seat of Cotaco County which was created February 8, 1818 and was renamed Morgan County in 1821.  The courthouse was built in 1837 with special taxes levied by the Alabama legislature in 1836 to replace the first courthouse built in 1825.

This building served as the courthouse until the late 1800's when dissatisfaction with the location caused the county seat to be moved. Several unsuccessful attempts had been made to move the county seat earlier, but finally in 1891 it was moved to the steadily growing river-front town of Decatur, and the records were removed from Somerville at night under armed guard.

Slideshow above created in 2012 by former Councilman Rodger McClure.

The Historic Somerville Courthouse is the oldest original courthouse in Alabama.
It was constructed in 1837, built with special taxes that were levied by the Alabama Legislature.  Court proceedings took place there until the county seat was moved to Decatur in 1891.  Later that year, the courthouse became the home of the Morgan County College, a Presbyterian training school.  More recently, the courthouse has served as a senior citizens center and has become a focal point for community events.  The two-story federal style building has undergone extensive restoration throughout the years, but still has most of its original architectural features. ​

​     The Somerville Courthouse is a rectangular structure built in the Federal style of the Virginia colony. The two-story brick building which has a stone foundation is set on a grassy courtyard surrounded by a low stone wall.

Built from a simple plan the building has five double hung windows across the upper floor on the north and south sides, and four windows and a door on the first floor. The windows have flat white lintels  and eight lights in each sash. The doors are centrally located and have a transom with two rectangular lights and a flat lintel above.

There are two end-interior chimneys on the east and west sides. The east side has four windows between the chimneys while the west side has only two windows.

A hipped metal roof is surmounted by a cupola set on a square wooden base. This cupola is octagonal and has a copper dome which is topped with a finial.

On the ground floor are four offices. The second story was used as a courtroom with small rooms for use by witnesses and jurors. The original mantels adorn the fireplaces on both floors and some of the original trim and doors remain. 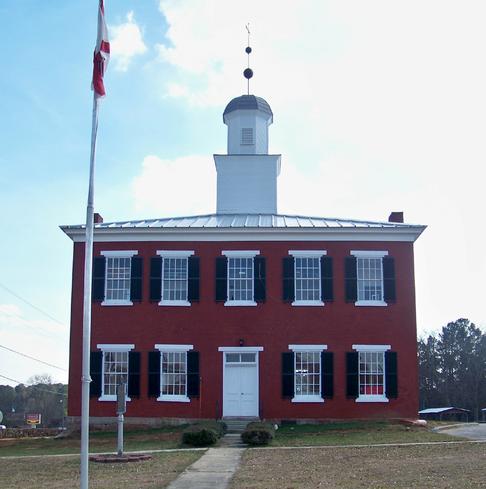